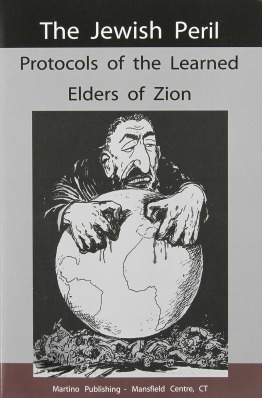 This post is mainly meant for english-speaking readers.
«The only statement I care to make about the Protocols is that they fit in with what is going on. They are sixteen years old, and they have fitted the world situation up to his time. They fit it now.»

(Henry Ford, in an interview quoted in the New York World, February 17, 1921)
«The world is governed by very different personages from what is imagined by those who are not behind the scenes.»

«Three hundred men, each of whom knows all the others, govern the fate of the European continent, and they elect their successors from their entourage.»

The Times. Philip Graves from Constantinople, 1921

We published yesterday an article from our Constantinople Correspondent, which showed that the notorious «Protocols of the Elders of Zion»,- one of the mysteries of the Elders of Zion» -one of the mysteries of politics since 1905 -were a clumsy forgery, the text being based on a book published in French in 1865.
The book, without title page, was obtained by our Correspondent from a Russian source, and we were able to identify it with a complete copy in the British Museum.
The disclusure, which naturally aroused the greatest interest among those familiar with Jewish questions, finally disposes of the «Protocols» as credible evidence of a Jewish plot against civilization.
We publish below a second article, which gives further close parallels between the languate of the Protocols and that attributed to Machiavelli and Montesquieu in the volume dated from Geneva.
______
PLAGIARISM AT WORK.
(From Our Constantinople Correspondent.)
While the Geneva Dialogues open with an exchange of compliments between Montesquieu and Machiavelli, which covers seven pages, the author of the Protocols plunges at once in medias res.
One can imagine him hastily turning over those first seven pages of the book which he has been ordered to paraphrase against time, and angrily ejaculating, «Nothing here.» But on page 8 of the Dialogues he finds what he wants; the greater part of this page and the next are promptly paraphrased, thus:

Un comentario en “The Protocols of the Elders of Zion. World plot or forgery?”